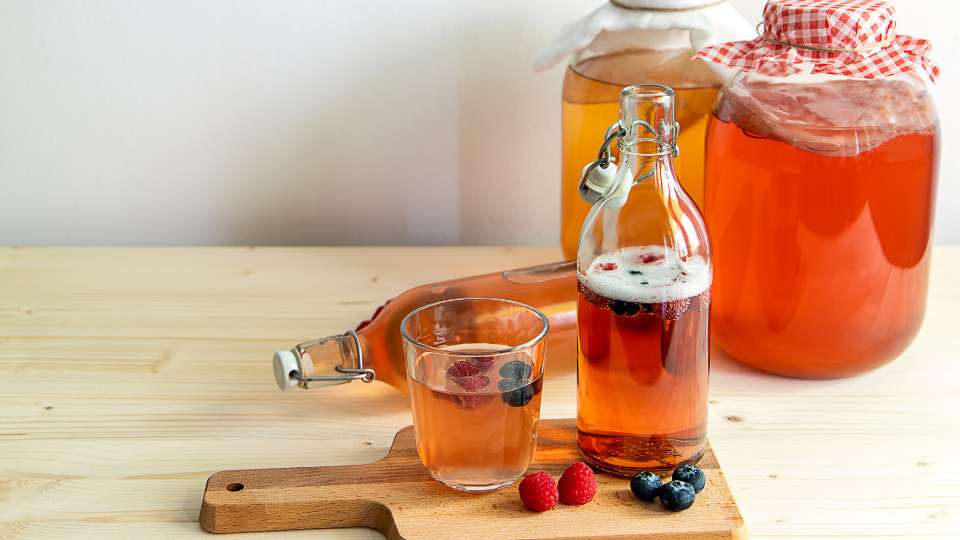 Kombucha is a fermented tea drink that has become popular due to its possible health advantages. Many people have questions about Kombucha: whether it contains caffeine or how much it contains. In this article, we will explore Kombucha’s caffeine content and discuss some factors that can affect its caffeine levels.

Kombucha is created by adding a combination of bacteria and yeast, referred to as a SCOBY or “mother,” to sweetened tea. The SCOBY consumes the sugar in the tea, creating lactic acid, acetic acid, and small amounts of alcohol. The final drink is slightly carbonated, tart, and slightly sweet.

Kombucha has a long history of use in traditional medicine, and recently it has become more popular due to its potential health benefits. While some people assert that Kombucha can aid in digestion, boost immunity, and enhance mental clarity, there needs to be more scientific evidence to support these claims, and more research is necessary to comprehend the full potential health benefits of Kombucha.

Does Kombucha have caffeine?

Kombucha is made from tea (Camellia sinensis), which contains caffeine. So, we can say that Kombucha does contain caffeine.

However, the caffeine content of kombucha tea can vary significantly. There are various methods of preparing it, and other factors such as the type or quality of the tea, fermentation time, and temperature can also affect the caffeine levels.

It is clear that proper kombucha tea fermentation only contains small amounts of caffeine. Additionally, the caffeine content can be controlled through simple techniques that can be used during the fermentation process.

It is also interesting to know that the caffeine present in Kombucha is combined with a natural amino acid that slows down its absorption into the blood. In this way, it generates many secondary benefits.

How much caffeine in Kombucha

Large caffeine consumption can have some negative effects on the body. Additionally, many soft drinks and even some bottled water brands also contain caffeine, which is why some people are attempting to reduce their caffeine intake.

In my opinion, it is important to find a balance. Caffeine naturally occurs in plants (serving as a natural pesticide) and has been consumed for centuries, so I believe that moderate amounts can be harmless or beneficial.

While the health benefits of tea have been established, the benefits of caffeine are still being debated by science, including the potential to prevent Alzheimer’s and Parkinson’s disease. However, there are conflicting findings in many studies.

L-theanine is an amino acid that is found naturally in tea leaves, especially in green tea. It can also be found in small amounts in certain mushrooms and the bay bolete mushroom. Its chemical structure is similar to the neurotransmitter glutamate, which plays a role in transmitting nerve signals in the brain.

Studies have shown that tea contains an anxiety reducer called L-theanine. It acts against the stimulating effects of caffeine, producing a relaxing effect 30 to 40 minutes after drinking Kombucha or tea. L-theanine has been found to boost levels of the neurotransmitter serotonin, which plays a role in mood regulation, and decrease levels of the stress hormone cortisol.

It does this by stimulating alpha waves in the brain, which calm the mind in a manner similar to meditation. In addition, by increasing the production of dopamine and serotonin, it improves memory and learning ability.

Other studies show that when L-theanine and caffeine are taken at the same time, it improves cognitive performance and mood. The polyphenols present in tea are said to not only provide health benefits, but also help mitigate the negative effects that caffeine can have when consumed alone.

For most people in good health, the small amounts of caffeine in Kombucha are not a concern and may even provide benefits. However, if you are highly sensitive to caffeine, there are simple methods to control, reduce, or even eliminate caffeine from Kombucha.

It is not recommended to use store-bought decaffeinated tea as it has undergone a chemical treatment process. The same applies to “naturally decaffeinated” teas, which may be damaged and contain toxic residues from the decaffeination process. It is best to avoid these types of teas.

Use a tea blend

Keep in mind that the exact caffeine content of your Kombucha will depend on the specific teas you use and the proportions you choose. You may need to experiment with different blends and ratios to find the one that works best for you.

To extend the fermentation time, leave the Kombucha to ferment for a few more days after the initial fermentation period. The exact amount of time will depend on the temperature and humidity of your location, as well as your personal preference for the level of tartness in your Kombucha. You can taste the Kombucha periodically to determine when it has reached the desired level of tartness.

It’s important to keep in mind that letting the kombucha ferment for too long may result in a very sour, vinegary flavour. If this happens, you can mix the Kombucha with a small amount of juice to sweeten it up and balance out the flavour.

Make your own decaffeinated teas

Fermenting Kombucha with coffee as the base is a good option for those who want to reduce the caffeine content but still want a kombucha with a bold, robust flavour. To make coffee kombucha, start by brewing a strong pot of coffee and allowing it to cool to room temperature. Then add the cooled coffee to your kombucha jar along with the SCOBY and starter Kombucha, and proceed with the fermentation process as usual.

It’s also worth noting that using coffee as the base for Kombucha may require a longer fermentation time than using tea. This is because the coffee may contain compounds that are more difficult for the SCOBY to break down, so it may take longer for the fermentation process to complete.

In conclusion, Kombucha does contain caffeine, but the amount of caffeine can vary significantly depending on the type of tea used, the fermentation time, and the ratio of tea to water. Most commercial kombucha brands contain small amounts of caffeine, typically ranging from 5-20 mg per serving. This is much lower than the caffeine content of regular tea and coffee. If you are sensitive to caffeine or trying to limit your caffeine intake, it is important to check the label of your kombucha tea and choose a brand with a low caffeine content.